At 228 kmh the TGV speeds through the scrubby, rocky provençal countryside. The clouds are great dirigibles similarly moving. They are chariots, horses, crumbling walls like those beside the sea in Cassis. They are time, my sense of time, minutes gathering together, hours coming apart.

“Scarves, echoes, pavilions…” is how the poet Laura Jensen saw some clouds, then wrote it down & made a poem about imagination. If one radically commits to a life-of-the-imagination, one agrees, I think, to let things disintegrate, to burn down to ash, up to smoke…

That a remaking may occur.

Off to the east some snowy peaks slide into view. A temple rises over them. A minaret. Was it just two weeks ago I was still marking my days by the five calls to prayer?

Last night I received a lovely message from Redouane, the waiter/barista from Villa Verte in Benguerir. He wanted to know how I am & when I might be back. He will invite me to meet his family, his new wife–even serve me white wine, which is not easy to obtain in Morocco.

But I am racing, racing northward—now at 300 kmh, the land opening out, softening into fields & windbreaks, vineyards & dense woods where half the trees are busy being green—that sweet early green which claims allegiance with yellow and maybe a little purple too.

Look, a village on a hill, some red roofs clustered around a steeple!

Look! Look! A chalky river… A stone farmhouse… The geometry of the Alps, planes & angles emerging beneath a cloudscape, rough seas to the east…

Just yesterday the barista at Bar La Fontaine was asking if we wanted our usual deux allongés. 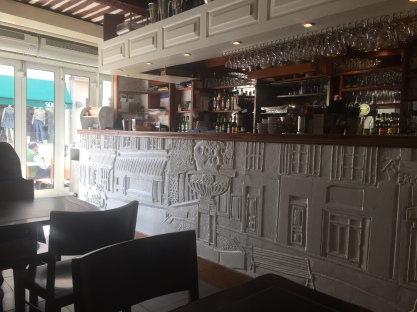 Just yesterday was wind up on an actual sea, a dark monolith shooting up out of the white-capped disquietude, a signal, a mystery I didn’t want to solve…

The diver herself solved it, appearing later with her long flippers, a darker body upon the dark body of the sea under storm clouds, the rain that never did fall.

At Le Four Banal, a small museum built around the ancient communal oven in Cassis—where bread was certainly baked but also herbs were dried for medicine during & beyond the plague years—the docent spoke gravely of the Order of Malta, the Knights Templar, freemasonry—those mysterious brotherhoods whose members helped the poor, cured the sick & also endeavored to secure land, & thus power, for themselves by “fighting terrorism” at home & abroad.

I’m tempted to make a sweeping statement about the traveler’s great project necessarily being to learn how little she knows.

But really, I am not a “traveler.” I am just me, leaving yet another place my understanding glanced the tip of.

Or did I merely butt up against the air padding the tip, the deep exhalations, the clouds surrounding the place. 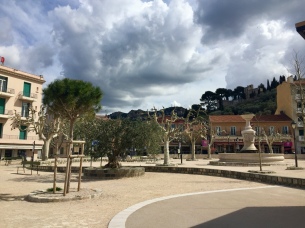 In Mary Shelley’s Frankenstein, Victor Frankenstein & his best friend Henry Clerval travel together through the British Isles, Victor fleeing his responsibility to the being he created & Clerval, ignorant of Victor’s situation, merely wanting to see & be enchanted by the world. Of his friend, Victor poignantly & astutely observes:

But he [Clerval] found that a traveler’s life is one that includes much pain amidst its enjoyments. His feelings are forever on the stretch; and when he begins to sink into repose, he finds himself obliged to quit that on which he rests in pleasure for something new, which again engages his attention, and which also he forsakes for other novelties.

But what are they really, these little affairs of the heart, when one is in a train racing through spaces both incomprehensible & there, just there…