Emotionally I am more suited to being somewhere over being en route to somewhere. Which is why I’ve made a journey mostly of being in place.

But, it turns out, even en route you are somewhere—

On a street outside the medina walking with your suddenly heavy luggage, having gone from light & nimble to burdensome & clunky because you could not resist the rugs, the caps, the hangings made of cactus silk. The bon prix you got for buying two. The très bon prix for three.

On this street, a young man offers to help you around the corner, down the cumbersome stairs & into the grand taxi that will take you part of the way there.

& it seems quite a kindness, burdened as you are, anxious as you are, even though you know he, the young man with the winsome if brown-toothed smile, the curiosity about where you’re going & where you’re from, will put out his hand once he’s handed you & your luggage into the taxi. & why not? you are on his street, are you not? & your heaviness in going, in leaving the blue staircases & walls, has been lifted a little by his willingness, his strong arms & back. 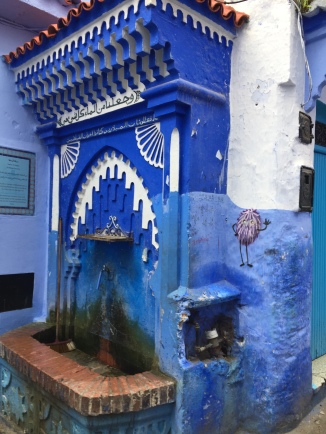 In much the same way, later, not yet there but outside the Gare Routière in Tangier, you know you are paying too much for a taxi ride to a waiting place more suitable than the spartan station, the resident young cats notwithstanding. But the driver is really, really nice. You feel this, though he will not budge on his price.

He ends up taking you to a semi-somewhere you would not, could not have known about on your own, a restaurant along the beach where you can have a decent vegetarian meal & sit for hours, watching passersby, some of whom catch your eye through the glass, motioning hand-to-mouth, meaning Woman-with-two-heavy-bags & more than you can possibly eat spread before you like treasure, can you spare a few dirhams for food?  The owner chases them away…

Crossing to the beach-side of the street, you can’t walk far with your load & so sit & sitting you’re almost somewhere because here are people out in the evening, men with games of precision other men play, kicking balls to knock down bottles, but never, no never, them all.

The sea, the Mediterranean Sea, is as blue as any water you’ve seen—it’s very own blue in fact, a blue you cannot conjure a word for.

A woman sits next to you. She looks to be older, by maybe five years, maybe eight. Her djellaba is a rich shade of brown, her headscarf green, orange, beige. You notice she is carrying two cellophane-wrapped roses.

C’est calme, she remarks, meaning the weather—not you, who are anything but calm while en route, in transition.

Pretty soon she’s offering you one of her roses—pour la fête des femmes. A gift you accept with, no doubt, some puzzlement on your face because she goes on to explain in French you have trouble parsing in your flusterment.

Oh yes, yes of course. March 8! In the U.S we march to “take back the night.” Here in Morocco they give flowers…

The two of you go on to have an all-too-brief conversation. She & her husband are retired & live in Fes but own a small house here in Tangier where they come to be near the sea. They adore the sea. Her English is very bad, she tells you, but her sister is a university English professor.

When her husband arrives, the three of you talk some more. Surprised you’re traveling alone, he cautions you not to remain on the boardwalk much past dark.

If you were not leaving on the night train, his wife would, he says, invite you to stay with her.

After they leave, you make your way slowly back to the train station, getting confused in a maze of construction. How to find your way through? You ask a security guard, who asks a construction worker, who speaks neither English nor French, so they find an employee at the posh hotel who directs you.

You try to follow his instructions, but in the dark you can’t see a way through the rubble.

The construction worker is still there, eating his dinner. You sign to him that you are still lost. He invites you to sit down, insisting you share some of his meal, making a sandwich of grilled vegetables, pouring a generous amount of olive oil, showing you how to dip the sandwich in it. Piling up some olives, too. Eat, he motions, eat…

Meanwhile he goes to find his boss. It seems he has decided not only to feed you but to walk you to the station, this man with thick curly hair & chestnut skin who’s about the age of your sons. The boss gives him leave, & taking both your bags, the one very heavy, the other a little less so, he guides you around the potholes & construction debris, through an alley & into the station.

You are about to dig into your purse for some money, repeating merci, merci beaucoup, when he disappears into the warm night—back to his meal, his work, his life in this place that’s no longer for you merely on the way to somewhere else… 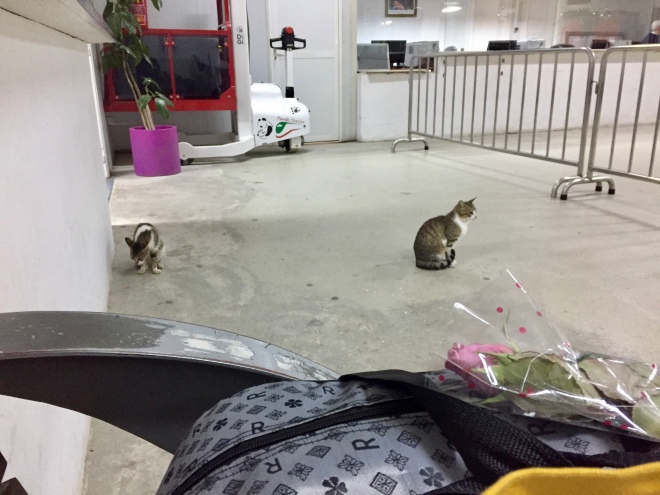